If you have truly submerged yourself into Bahamian culture, you may have heard several of the following phrases:

Roach on ya bread!

Oh what poets we Bahamians is! All of these phrases basically mean the same thing, that your situation is not good. Surely, seeing a cockroach on your food item would make you not want to eat it, no matter how delicious that food was going to be.  The first phrase however, also has another layered meaning to it. See if you can figure it out from this song:

Get the drift?? No? To put it eloquently, it’s a sexual reference to someone stealing your significant other. Roaches are nasty, sneaky  creatures, which could aptly describe someone trying to steal another’s s.o. If you’re not familiar female anatomy slang then I’ll let you figure out what body part the bread is in reference to.
I know, it’s a bit vulgar for my liking but people use the phrase to describe other not-so-nice situations.

Maybe you can add these to your list of Bahamian metaphors and maybe even use them, although as said in previous blogs, when using Bahamian slang or phrases, do so carefully and wisely.

Urban Dictionary defines jungaless:  females that have pink, blue, green or freaky colored hair wears skin tight clothing with parts of their body out, talk loud and use profanity and is usually seen in Cock Tails & Dream (Jungalass Night Club of the Bahama 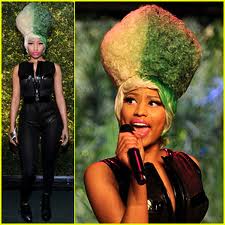 s) dancing on their head and would have no problem opening up a beer with their teeth! END_OF_DOCUMENT_TOKEN_TO_BE_REPLACED

In Bahamianese we have various ways to show our emotions through words. You will rarely hear someone say something like this **in my valley girl voice**”Oh my gosh! That is so totally cool!” You’d probably get some weird looks on that so here are common words/phrases that we use in showing excitement.

**Remember to use in proper context! Just because you hear it, doesn’t mean you say it.**

Well Holy Savior pilot me! – is like saying Lord help me stay in control because this child is about to get a whooping!

Bey! – another universal word that is used in many ways. Mostly referring to when you’re calling someone you’d say “Bey, come here,” but it can be used to signal agreement in excitement. Eg. If a friend told you something sad you’re response could be “Bey, thas a lite wybe,” or if you got some pretty exciting news it’d be “Bey, thas awesome bey!”

Chal!/Chile please (don’t make me sneeze) – I like to use this one, well, just the chal part. Chile please is more like saying I’m not interested or checking… sorta like saying get real or something. Just listen for it in context because you wouldn’t say it if someone just told you their kid/aunt/uncle just died.

Dred – is like a shortened form of muddasick dred but can also be used to describe something that is really good i.e. that shirt look dred aye!

Tru tru – is said in agreement instead of saying OK.

Don’t do it! – This is a newer phrase that just became popular in the last 3-4 years. It doesn’t always mean literally don’t do something, but again, one of those things said in excitement or disagreement. An older version of this is don’t play with me!

Ya lie!/ Fa true? – can be used interchangeably  if someone is telling you something that is really hard to believe.

So I was trying to think of a way to group some Bahamian words and I realized we have a lot of different terms for sex-related things. I’ll try to keep it as clean as the topic allows. Me giving these and their definition by no means is me suggesting that you use these terms but rather to simply make you aware of what is actually being said if you’re in a conversation with a group of Bahamians.

Bubby: adj. used to describe the shape of one’s lips. It’s usually used to say that it’s big and round. n. refers to a woman’s breasts.

Cuckoo soup: soup into which certain bodily fluids are placed to “tame a man”, especially one who is trying to win the heart of that man; said to have magical powers in winning the man in marriage.

Gun casin: used to describe the curves of a woman’s upper thigh area (ie. like a cowboys’ gun case) to say that she is curvacious.

Sweetheart/sweetheartin’: to have an affair or be cheating with someone who is not your spouse/(main) significant other.

The act of sex has many different terms and has changing over time with new generations. Here are a few of those terms:

Again,  this list of words is not for you to go around talking this way because it just sounds vulgar. It’s just to inform you of what’s really being said and you’ll think twice before asking someone if they juice (and I’m talking about making juice using a juicer).

Ine hear no one say hambrella, tingum dem and lieness  and some of these terms in a minute!