There are some people, I won’t say most, that think everyone from the Caribbean must speak with a Jamaican accent and say “mon” or have dreadlocks. For those of you that have checked out my posts in Bahamianese can very much tell that we don’t sound like Jamaicans. Besides the fact that Jamaica and The Bahamas are two different countries, there are some other differences between us.

I could probably list a whole bunch of things that distinguish Bahamians from Jamaicans but some of those things are not things you could tell just by seeing or speaking with a Jamaican. Language/accent and temperament are the more obvious. Of course to someone from the Carbbean, they would be able to tell a Jamaican from a Bahamian by the types of food, certain aspects of clothing or hairstyles (espcially the men) and most definitely the music.

Jamaicans speak patois (Jamaican creole). Bahamians speak Bahamian dialect. Although the definition of patois includes dialects, Jamaican patois has it’s own unique phonology, grammar and of course vocabulary. Typically I wouldn’t suggest Wikipedia as a source for anything, reading through it, they did a pretty good job with breaking down Jamaican creole and giving examples of sentence structure and things like that. If you’re interested in the more technical aspect of Jamaican linguistics check it out here.

Jamaicans are hotblooded. Bahamians are laid back. These are generalizations yes however being a Bahamian who has lived with Jamaicans and also having see the two cultures interact, I can say the generally speaking this is true. This is not to say that there aren’t laid back Jamaicans or hotblooded Bahamians. This is something you would observe sort of in the same way people say that country-folk are more polite than say, a New Yorker.

Jamaica’s main music is reggae. The Bahamas’ main music genres are junkanoo and rake n’ scrape. We have two sets of music because Junkanoo music is mostly festival music, performed live during special events such as the Box Day Parade and New Years.  It would be comparable to a band with trumpets and several sets of drums etc… Rake n’ scrape music has an artist(s), and the instruments traditionally were handsaws with something to scrape against it, old wash basin and the scrubber and a small goat skin drum.

Jamaicans and Bahamians have a unique sense of style. I couldn’t find  many pictures that would best compare how the two Caribbean countries dress, so I’ll just describe it. Jamaican men tend to wear tighter fitting clothes than Bahamian men (generally). The jeans especially seem tighter. The style is somewhat reminiscent of a cross between Californian surfer types and cowboys because Jamaican men  sometimes wear large belts with interesting buckles and unique loafers. Bahamian men are more influenced by black America so the men wear looser, baggier clothing. A polo shirt (usually of the Ralph Lauren or Tommy Hilfiger brand) and jeans are what I would describe as the Bahamian man’s national uniform. It’s also more common to find Jamaican men that have colored or bleached their hair than Bahamian men.

In any and all cultures, there are people that do not fit the norms or generalized views  of that group of people but as this world gets smaller and smaller due to globalization, it’s important that we become more aware of differences in cultures. It’s more polite to ask about a cultural norm than to assume the wrong one!

Towards the end of summer, I went on an amazing boat adventure tour in which I got to see some of the Exuma cays. There are over 700 islands and cays that make up the Bahamas although most of them are uninhabited. There are some celebs that own a few private islands in the Bahamas including Nicholas Cage, Julia Roberts and Johnny Depp. But on this tour, I got to see these and some unique treasures that Exuma has to offer.

Who knew pigs could swim?!

They swim pretty fast I tell ya!

Checking out the scenery.

Got to feed the iguanas.

Looking down into a cave!

Speeding past the white sand beaches!

We did this on a day that a bit cloudy and actually storming in some areas. Imagine if the sun was out shining in its glory! Could you imagine?! Beautiful. 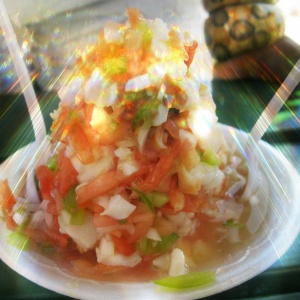 Isn’t she a delightful, delectable beauty?! The average Bahamian would say yes, and I would have to agree. I love fresh conch salad [pronounced kunk or kawnk]. Strombus gigas, as it is referred to in the bio world, is a sea mollusk that lives in a shell. END_OF_DOCUMENT_TOKEN_TO_BE_REPLACED