I’ve read around the internet that in some places sky juice is another way of saying plain water. In The Bahamas, sky juice is far from plain water, unless that water happens to be from a coconut. It’s coconut waters (fresh out of the nut) mixed with gin. Some versions also include sweet milk and the coconut jelly.

When I was a kid I could not stand coconut water with jelly…it totally freaked me out having those thing float in my drink and as I’m swallowing to have to chew occasionally. It was just too much for my life so I stopped drinking coconut water altogether and hadn’t touched a lick of it in over 10 years. That is, until last month when I went to New York for a student media conference. There I saw coconut water, “organic” and bottled in a carton container as opposed to a can like what I’m accustomed to seeing. I said what the heck, I’m in New York, I’ll give it a try. I loved it and that was what I drank for the remainder of the trip.

The way I reacted, you’d think I had never had it before. It’s just that I used to frown my nose at the bottled stuff and say ain’t nothin’ like real coconut water from the actual shell. I didn’t give it a chance because I 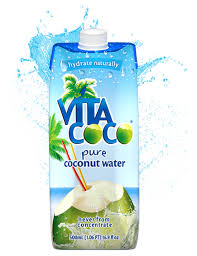 figured it’d be laden with sweeteners and artificial crap and really just ruin the authenticity of it. But, I was wrong. It really took me back to those days of holding coconuts to my head and gulping it down.

There was a coconut tree that hung over into our yard so sometimes my dad would climb up and get a few of the fresh ones for us to drink. His then girlfriend would use the older coconuts that turned gray/black for the hardened coconut flesh to grate and cook peas n’ rice with. My godmother would use the hardened coconut to make coconut tarts. I also purchase coconut oil for my hair and to occasionally cook with.

Coconuts are such a wonderful native fruit with so many uses but nothing beats having a cold drink of sky juice on a hot summer’s day.