I was having a bit of a creativity block the other day because I wanted to write something about schools, but I read a recent article from Huffington Post about people being late and I thought it totally applies to The Bahamas. Bahamians will show up late to weddings, funerals, work… just about anything you can name. There’s even references to people showing up whatever time they feel like to their jobs because they don’t care about being on time. 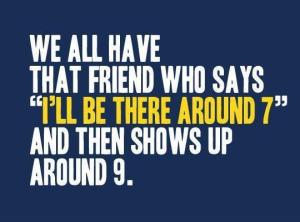 Now I’m sure this is not isolated to Bahamians or even black people only, as the HP’s article didn’t indicate the race of the persons he had encountered, but I think that being late is a negative attribute commonly associated with black people.

I learned that here in Emporia, they don’t play that game. No, not all! If the bus is scheduled to arrive at 5:03, sure enough, 5:01:22 they are at the stop light at the entrance of the school.

I, personally am not a late person typically. I believe in the phrase, “You’re late if you’re on time. You’re on time you’re 5-minutes early.” If someone is scheduled to speak at the hour, it’s really rude to just be walking in and getting settled etc.

I know this may be hard for some Bahamians living abroad, but it’s advisable to adapt or you could find yourself losing credibility of co-workers and etc.