Known in scientific terms as Chrysobalanus icaco, the coco plum is one of my favorite native fruits to eat.

Coco plums can be found growing in and around cypress swamps, low areas, tree islands, beaches, sand dunes, canals, riverside, ocean side thickets, by lakes, ponds and even in some landscaping. They have a meaty white texture and like most fruit, the meat covers the seed in the middle encased by a hard outer shell. When I was a kid, I would eat a coco plum clean and then crack open the shell to get to the seed. The seed did not taste good! It was tarty and bitter.

Coco plums don’t just come in the off shades of white and yellow. Some of them have blushes of pink.  There are also ones that are called black coco plums, but they aren’t really black. They have a really deep or dark blue color. 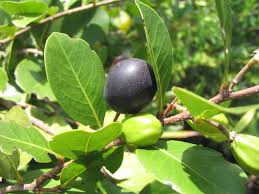 There was a coco plum tree right across the street from my house so I would raid it as soon as they got ripe. I would come back home with a shirt filled with them. As much as I enjoyed them, too many of them in one sitting could lead to a bit of constipation, lol. But to me, it was well worth it. I would knock a spider out of their home in the bush if I needed too. Spiders seemed to frequent these sorts of trees for some reason.

Coco plums can be used to make jellies or preserves but I have not had the privilege to try it in that form. I don’t even know anyone that has ever made it into a jelly, but it is possible. One of natures sweet delights that can be eaten as it, the coco plum needs no alterations to be a cool little snack and you can make an adventure out of it trying to pick them!

One thought on “Native Eats…Coco Plums”