A typical Bahamian Saturday or Sunday morning involves recovering from the previous nights’ festivities and one way to do is to have a heaping bowl of souse (rhymes with house). Souse is a very simple Bahamian soup made with meats like chicken, turkey, pig’s feet or sheep’s tongue in a clear broth made of lime juice, onions, carrots and potatoes. Goat peppers or bird peppers are added for the extra kick. Whole all spice and bay leaves add an aromatic flavor. Souse can be served with johnny cake, grits or even toast. Although I’m currently on a year-long vegan journey, I bought frozen sheep’s tongue so that I can learn to make it for my fiance and buying a bowl can range $10-$16 depending which island and restaurant you get it from. I also feel that it’s important for young Bahamians to learn how to make out traditional dishes and make them at least once in your life but I digress. Anyway, finding a recipe for sheep tongue souse on the internet was harder than finding a chicken souse recipe because sheep’s tongue has a few additional steps in the cleaning and preparation process. Since I could not find a legit recipe, I decided that I will write and post my own recipe. Please bear with me because I honestly don’t like writing recipes.

Begin by heating a pot of water with lots of salt until comes to a boil. Add the sheep’s tongue and let it boil or scald for 10-15 minutes. You can use this time to prepare a johnny cake or bread to go with it or peel and dice the potatoes and onion.

Drain off hot water and run the tongues under cold water. You’ll need to be able to handle them with your fingers so allow to cool for a few minutes. With a filet knife, remove the rough, white external layer on the tongue that has the taste buds. Try to cut as close to the skin as possible to avoid throwing away meat. Dice into small bite size pieces and set aside in a bowl. 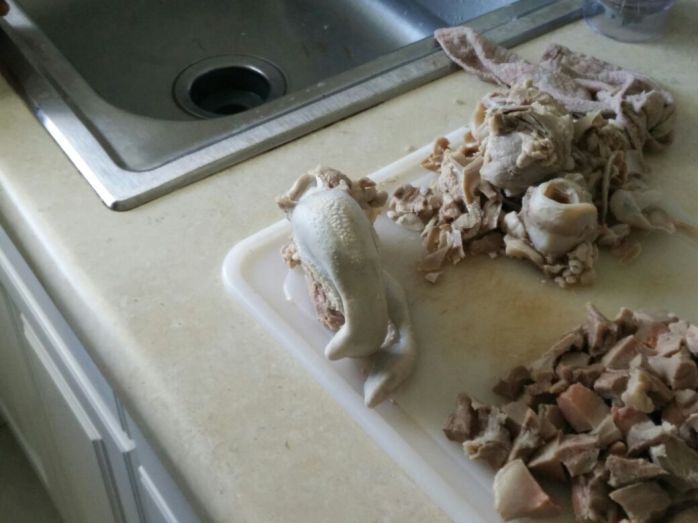 Return the pot to the stove with fresh water and allow to come to a boil. Add potatoes, onions, all spice, bay leaves and optional ingredients. Add the sheep’s tongue and continue cooking until potatoes are done. Season with salt and lemon juice to taste.

Note: For my first time, it came out pretty good. My fiance said it was decent. The meat needed a little more salt during the scalding process so that it could begin absorbing some flavor and not just be surrounded by the flavor of the souse water. The next time I make it, I would even throw a few of the all spice balls and a bay leaf in the pot during step 1. Of course, soups and stews always taste better the next day after the flavors have had time to meld together.  If you’ve made sheep tongue souse before, do share your experience!

It’s been quite a long minute since I’ve written anything on this blog but I’m back for good this time and willfully directing my life in a direction that involves maintaining this site, sharing more stories and hopefully creating dialogue between myself and readers in the blogosphere. Sometimes I go on long hiatuses from writing and blogging because of things going on in my life and also just not feeling inspired with words or things I think people would be interested in reading. I’ll continue with the things I used to share but I’ve also added new topic areas and I’d also like reader feedback. What sort of topics or stories are you interested in reading about The Baha (mian) Life? I want to make reading this blog worth your while!

Here’s a little bit about what I’ve been up to since March 2014:

I’d say those ventures have kept me pretty busy and still not busy enough so I’m tackling a few other things as a part of my self development. I often joke with my friends that I’m going to be a forever student but I truly enjoy learning and getting the opportunity to apply the things I’ve learnt.

Anyway, cheers to more blog posts and I want your feed back!!

For the past few months in Bahamian news, besides waves of crime and gun violence, there has also been the issue of VAT or value added tax and how it will affect the individual Bahamian pocket. A lot of talk has been as to whether it will do more harm than good for The Bahamas in the long term and comparisons have been made to other countries that have a VAT system in place. I’m no expert on any of it so I’ll post a few links below that breaks down all the dirty details because unfortunately there are vast groups of people at home that don’t know or don’t care about what’s going on around them .

Occasionally when I think, I’ll have a pretty decent idea for a business and immediately imagine the successes it could have if the right amount of work and effort is put into it. Then I’d have to remember the reality of where such an idea could work in the Bahamian market I envision it in because I have to remember how stubborn our people tend to be about sticking with the old traditional way of doing things.
When you venture off to college abroad, you’re exposed to so many new things and ideas and you feel so inspired and motivated to bring all these great new toys back home. But when you get there you realize that no one else knows how to play with your new toys or want to learn and thus you’re stuck playing with the old ones until they open their minds to do learn.
It makes you reconsider the desire to rush back home and show everyone your new toys and skills and I’m sure many of my fellow Bahamian college graduates face this challenge every fall and winter as they too decide what is the next step for their life.
Growing up in a “third world country” and going to school in a first world country is sometimes challenging to connect the two worlds in a way that speaks to your talents and passion. I’m sure if you Googled, you won’t find many Bahamian ballet dancers or neurophysicists. Point is, until we can grow to a place where the two worlds meet in the middle, there’ll be more and more graduates not rushing to go back home with their new toys because they have no one to play with.

In lieu of the Philippine’s tragedy involving Typhoon Haiyan, it made me think back to one of the major hurricanes I’ve experienced, Hurricane Floyd of Sept. 1999. Thankfully there were no deaths on the island of Abaco due to the storm, but I’d like to share a bit of my experience.

My dad had gone out on “the banks” on an extended crawfishing trip and came back early because of the impending storm. And since I was already staying by my cousins, I wanted to ride out the storm with them because they were going up to the local hotel. I was 10 so I was not thinking, maybe I should stay with my dad and secure my belongings because what 10-year-old thinks of those things. Anyway, us along with what felt like was half the town, were in this hotel, people crowded two or three families to a room, others piled into the hallways in dim darkness.

When night came, so did the winds and they surely did come! Many of the rooms had glass sliding doors that sang soprano notes as the wind threatened to burst through. It was a bit scary. But in the midst of all of this, I was excited that I got to sleep on the floor in the corner of the hall next to my then crush. I know, a major storm is going on and I’m excited and couldn’t wait til the next day to tell my best friend about it. I was not a fast child so sleeping literally means sleep because when I woke, he was long up and gone.

The next day, some parts of town were still somewhat flooded, large trees that I had once thought would never move, were thrown across the roads and of course there was no electricity or water. Some of the graves had been unearthed, I know, creepy. When we were finally able to go back in town down the road to my cousins’ little wooden home, watermarks on the walls indicated that water was over 5 feet high in the house. Had we stayed there, my little four foot nothin’ self would’ve been bobbing to stay afloat. The house itself was no longer liveable. Surprisingly, all of the items we had placed on the top bunk bed in the room were dry and untouched as though nothing happened. Our uniforms, still neatly pressed and our books unscathed. My cousin should have listened when we told her put the desktop computer up on the bed too.

My cousins ended up moving in with me and my dad and we spent the next few days tearing down the house.  That was fun, breaking down the house, that is until I stepped on a wooden board with a nail that thankfully wasn’t rusty and I wasn’t going to die of tetanus. In my dad’s house, besides the tv’s doing the titanic sink into the water, the house was still in tact with no major losses. I did lose my baby book and keepsake items, the only things I wish I would have saved.

The town spent the next few months rebuilding and relying on aid from the U.S. which including donated books and computers to the school, t-shirts and other articles of clothing and other essentials like food and water. It was an interesting experience, I pray I never have to relive but through any situation, once you have family and support, you can get through it. That year, me and my fellow 6th graders, weren’t sure we’d even have a graduation, but we raised funds, and sold cakes and did everything we could and had ourselves a well-deserved graduation in June of 2000.

Not sure how to end this, but feel free to share experiences you may have encountered with hurricanes or other natural disasters.

How to help the Philippines